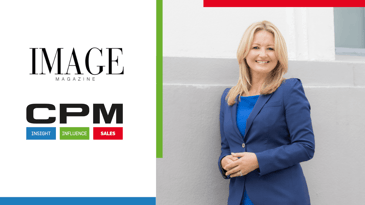 At CPM we are delighted to share with you the latest feature of Lorraine Butler, CPM Ireland Managing Director, in Image Magazine.

The October edition of this prestigious magazine includes a piece on Lorraine’s work to empower women in the retail industry. Lorraine Butler is a founding member of TWIG (Today’s Women in Grocery), an empowering organization which was created as a supporting branch of the IGBF (Irish Grocers Benevolent Fund) to support women to network and develop their careers in the Retail sector. CPM have sponsored for fourth year in a row the Women’s Networking Business Lunch for TWIG and, in May 2019, we were also proud to be the founding sponsor of their Mentoring Programme, where CPM Ireland initiated, coordinated and sponsored the opening session of the mentoring initiative under the TWIG umbrella.

Have a look at the full article of Lorraine in the latest edition of the Image Magazine: 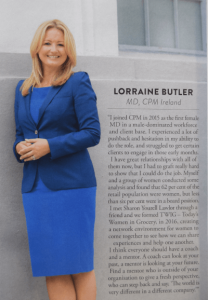 "I joined CPM in 2015 as the first female MD in a male-dominated workforce and client base. I experienced a lot of pushback and hesitation in my ability to do the role, and struggled to get certain clients to engage in those early months. I have great relationships with all of them now, but I had to graft really hard to show that I could do the job. Myself and a group of women conducted some analysis and found that 62 per cent of the retail population were women, but less than six per cent were in a board position. I met Sharon Yourell Lawlor through a friend and we formed TWIG – Today’s Women in Grocery, in 2016, creating a network environment for women to come together to see how we can share experiences and help one another. I think everyone should have a coach and a mentor. A coach and look at your past, a mentor is looking at your future. Find a mentor who is outside of your organisation to give a fresh perspective, who can step back and say, “The world is very different in a different company.”

END_OF_DOCUMENT_TOKEN_TO_BE_REPLACED

Me & My Money: Lorraine Butler, Managing Director at CPM

END_OF_DOCUMENT_TOKEN_TO_BE_REPLACED

Recieve updates direct to your inbox